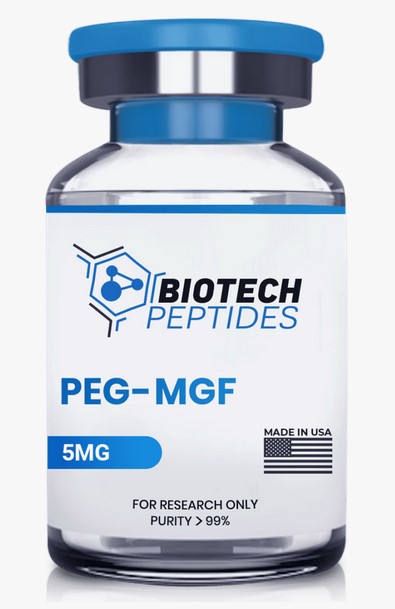 Pegylation is the reaction that occurs when polyethylene glycol is joined to another substance. In the case of PEG-MGF, this is done to prolong the molecule’s half-life in the blood by decreasing its clearance in the kidneys and attenuating the body’s natural immunological response to the medication. Pegylation is widely used, harmless, and beneficial in many ways. Because of its short half-life in blood, PEG-MGF was created. Exogenously delivered MGF has a limited half-life because it is quickly cleared from the bloodstream unless injected directly into muscle tissue, which then remains for prolonged periods. PEG-MGF helps mitigate this drawback. Buy Pegylated MGF online if you are a researcher.

Muscle injuries range from mild strains and sprains to severe avulsions, often occurring in sports. Many times, surgical intervention is necessary to fix this kind of damage. While therapy options exist, most subjects still face a lengthy recovery period and less-than-ideal outcomes. Injection of MGF into injured muscle has been shown to protect cells in a rat model of muscle damage by lowering oxidative stress and reducing the production of inflammatory hormones.

Researchers found similar results, demonstrating that MGF controls inflammation in muscles and aids in the recruitment of macrophages and neutrophils to injury sites. Both investigations hinge on the well-established fact that muscle damage brought on by exercise triggers the production of the MGF-related growth factors IGF-1Ea and IGF-1Eb.

Scientists worldwide studying endocrinology have shown that, unlike IGF-1, MGF is equally as effective in stimulating the insulin-like growth factor 1 receptor. There is evidence that activating this receptor has beneficial effects on health, including a slower rate of aging, a more significant percentage of lean body mass, and better regulation of body energy stores. With this ability, PEG-MGF can produce effects comparable to IGF-1, leading to better muscle regeneration, more significant fat metabolism, and improved lean body mass.

According to research conducted by the University of Illinois’s bioengineering department, MGF prevents cardiac muscle cells from undergoing programmed cell death in response to hypoxia. The peptide also attracts cardiac stem cells to the site of damage, which may aid in regeneration and repair in the aftermath of a heart attack. Within eight hours of hypoxia, rats given MGF demonstrated reduced cell mortality and increased stem cell recruitment compared to controls not given MGF. The study’s primary author thinks that targeting injured regions with nanorods containing MDF might be an efficient strategy for targeted, long-term treatment with the bioactive peptide in heart disease.

Improvements in cardiac function after a heart attack have been linked to the targeted administration of MGF, which has been shown to reduce pathologic hypertrophy. PEG-MGF improved hemodynamics and reduced cardiac remodeling in the study rats compared to those given a placebo. Similar results have been shown when MGF was administered to subjects with acute myocardial infarction; Researchers report a 35% reduction in cardiomyocyte damage.

Recovery and Development of Bones

In rabbits, PEG-MGF was shown to accelerate the proliferation of osteoblasts, the cells responsible for mineralizing bone, speeding up the pace at which bone damage was repaired. High dosages of MGF accelerated recovery in rabbits, with results comparable to those found in controls six weeks after treatment. Hopefully, this method may aid researchers in discovering new ways to speed up bone mending and lessen the number of time subjects must spend immobile.

Experts recently evaluated research examining the consequences of elevated MGF levels in the brain and spinal cord over time. The research shows that mice with elevated MGF levels can better maintain cognitive function and peak cognitive performance far into the old life. Experts claim that “the effectiveness of MGF in the brain is age-dependent” since earlier overexpression of MGF in the research mice had better outcomes immediately and in the long run.

MGF treatment has also been shown to improve muscle weakness and reduce motor-neuron loss in mouse models of ALS. Following hypoxic damage, MGF is over-expressed in brain areas where neuron regeneration is most robust. Although exogenous MGF won’t reverse the underlying illness process, it may alleviate the symptoms of some neurological disorders by protecting neurons in the brain and spinal cord from dying.